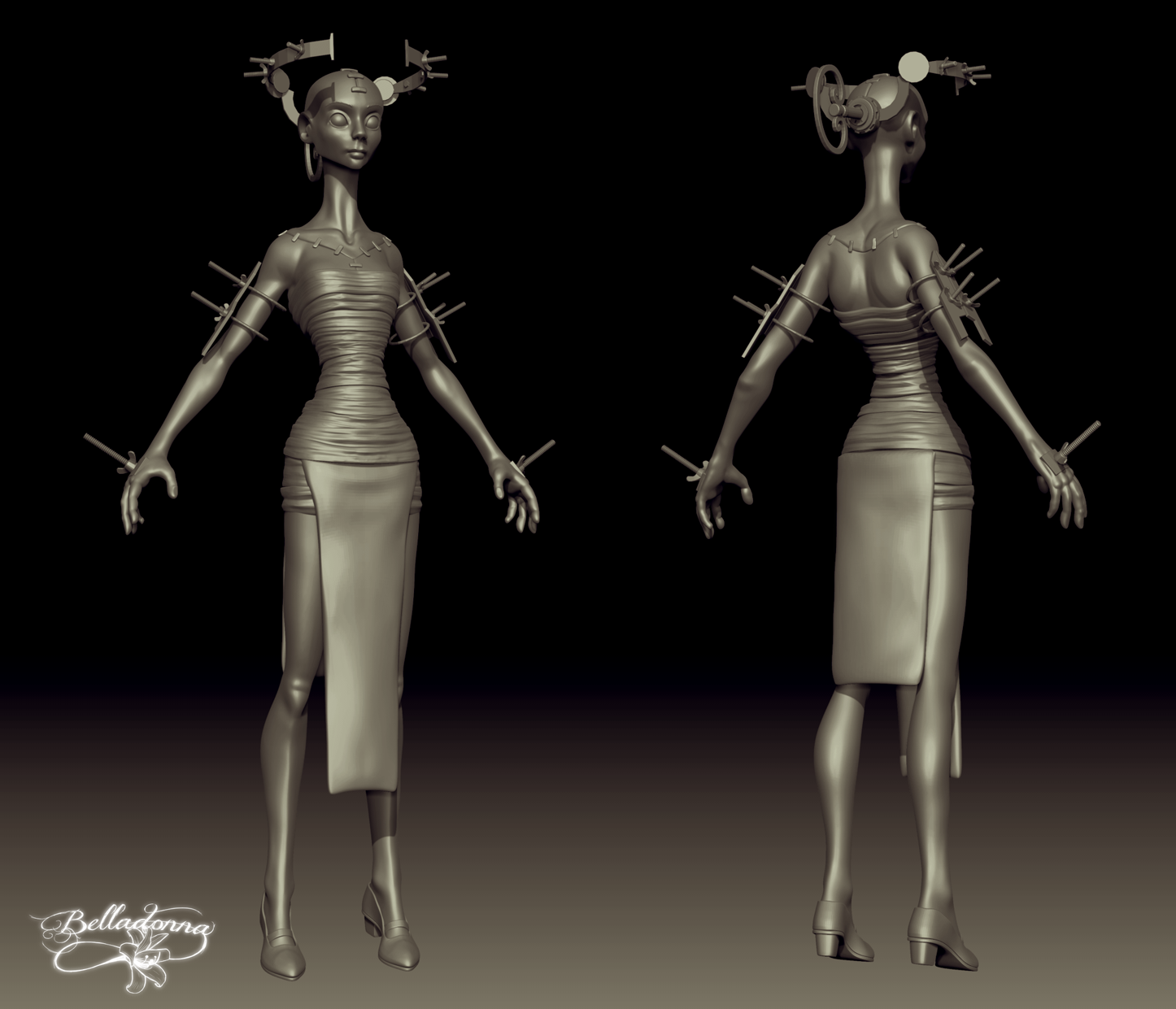 Okay, so it has been a really long time since I made any public update to this project.

In the meantime I have been on a short vacation in Spain, and participated in a Game Jam. Thieves beneath the Face is the title of the short adventure game that ate almost two weeks of my time (ten days making, four days recovering!). And I spy a new little Game Jam on the horizon, so no rest for the wicked.

Back on subject! I have earlier shown the head of the main character,  and I have kept working and can now proudly present the rest of the body. The head stitched to the shoulders nicely, just as planned.

The loose, cloth-y parts of her dress looks a bit boring at the moment, but they will be simulated to follow the animation, and will get a lot of interesting folds and creases from that. 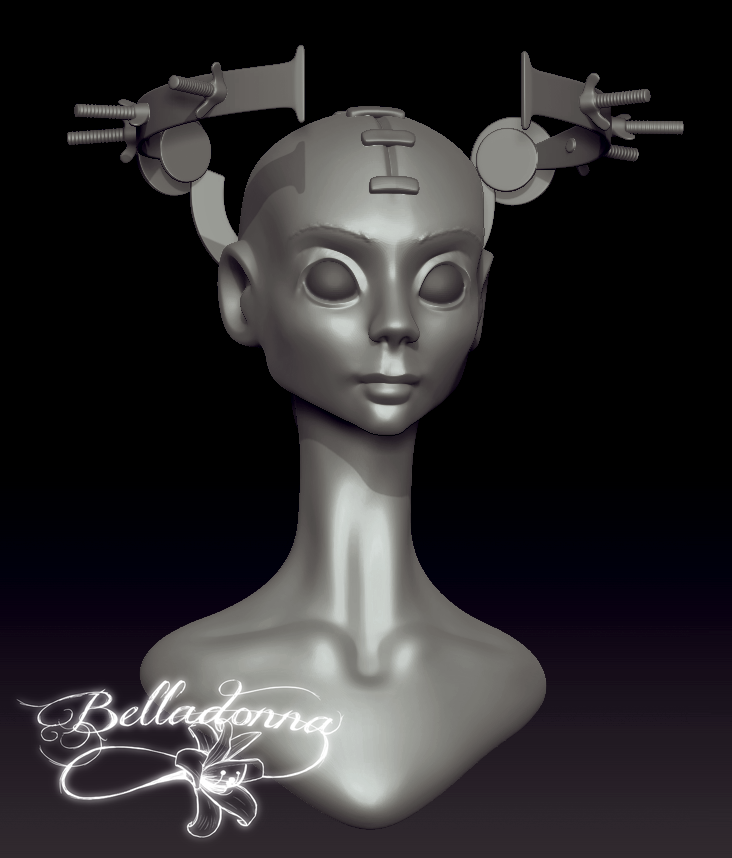 The devblog has been quiet for a while, and I must admit that it is partly because I haven’t found much time to work lately. But it is also because I have been working on delicate, time consuming things. I have now officially started working on the 3D model that will be the player character.

It is just a head so for, but I will start working on the body momentarily. Because she is a re-animated Frankenstein, the seam between this bust and the rest of torso will be very natural. I will simply create a headless body and stitch this head onto it, and it will look just like it should!

This is a highpoly sculpt in Zbrush, which will then be made into a game model, animated and then pre-rendered and put in the 2D game. But before I do this I want to see if I am able to create a dress with cloth simulation. If I can do that, I will be able to make this character look just like I want her to. 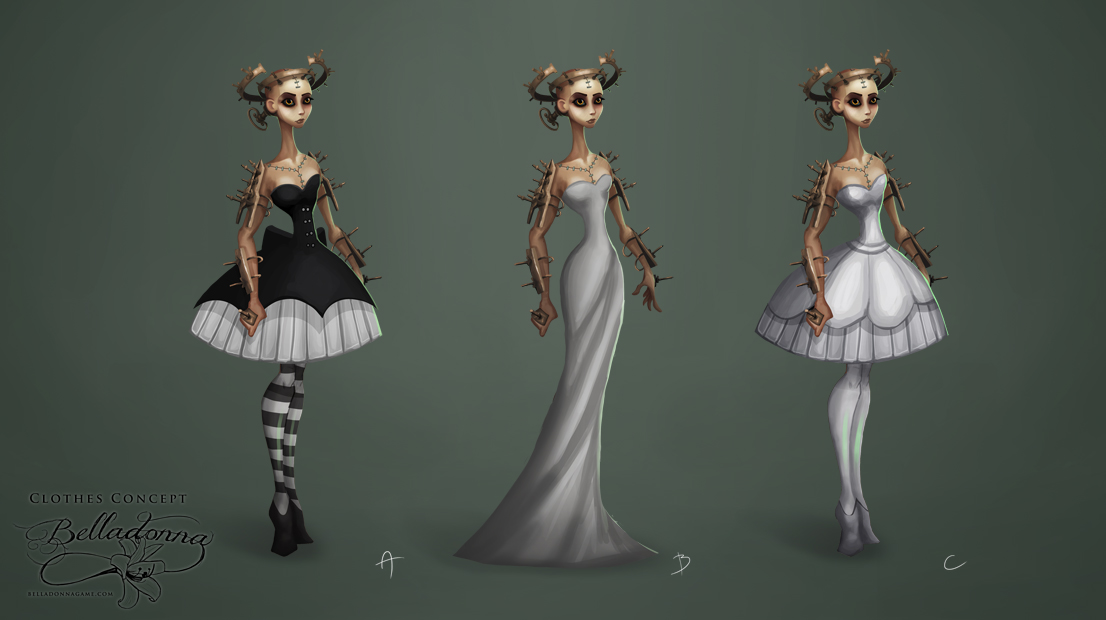 I have experimented a bit with different clothes for the main character. Historical correctness is not my main concern in this production.

The one called “B” is pretty interesting, but I won’t be able to animate long, falling cloth in a good enough way, and also: this is a character who will walk around a lot and I want to show her legs moving to symbolize that.

I am leaning towards “C”. This should, after all, presumably be the clothes she was buried in!

(Also, Visionaire handles lighting by multiplying in darkness, so the character itself has to be pretty bright to start with. Technical details.) 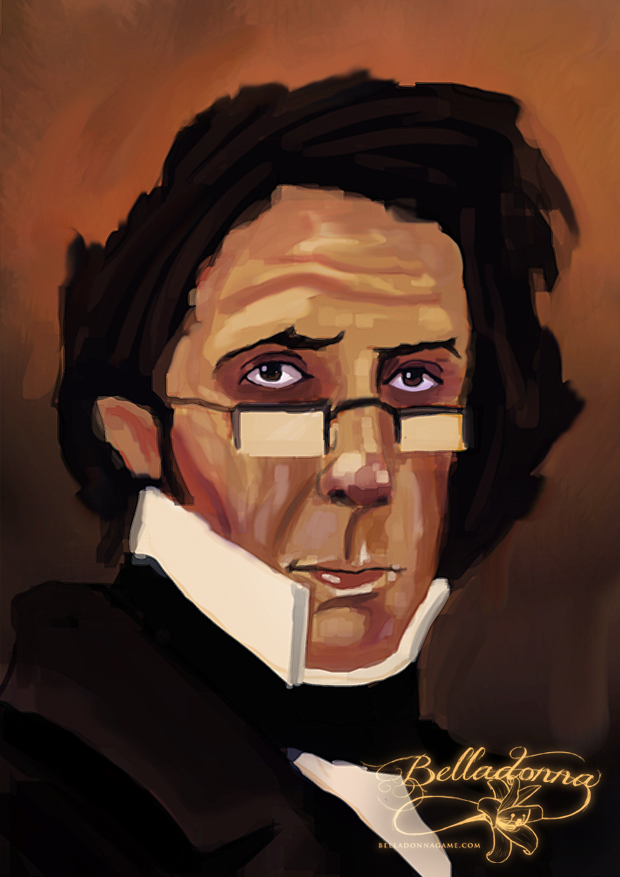 I made a quick and messy of the doctor, and husband of Belladonna, who discovers a way to re-animate corpses. The concept is intentionally kept messy, because it will also serve as a painting on a wall inside the game, so it has to look even more painted than the rest of the environment.

The doctor, possibly named Frans, is the villain of the story. It is worth noting, however, that he is no megalomaniac set on world domination. In fact, he is hardly evil at all. His sin is that he tends to overreact when he feels he’s being treated unjustly. When his baby son dies, he dedicates himself to the task of bringing the dead back to life. When his wife is unfaithful his mind immediately jumps to murder.

A lot of the narrative is from the perspective of this character, and my ambition is to constantly redeem him, and give motivations for all his villainous acts.  Belladonna herself is no saint either, and her husband definitely feels justified in his actions. 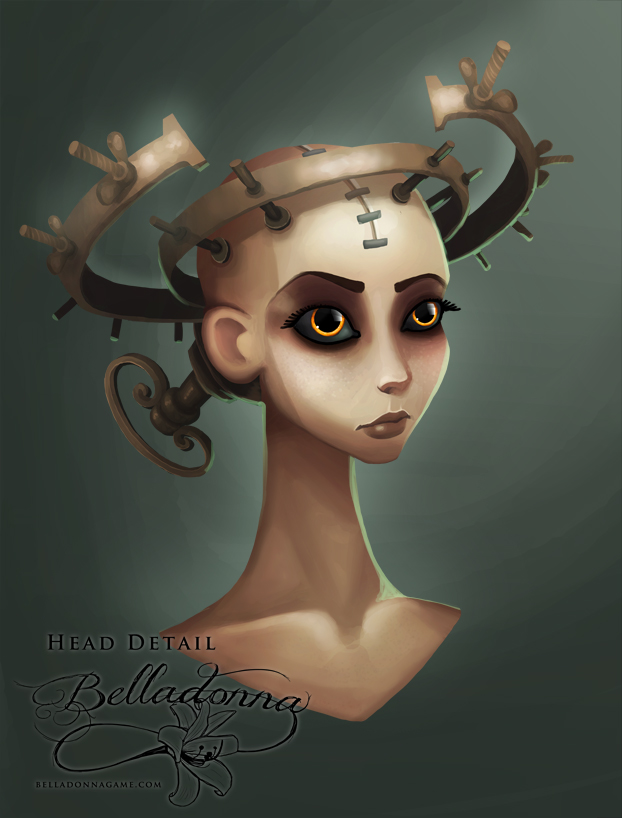 It’s about time to get some shininess into this development diary. Here’s a concept art for the face of the player character. Yep, you will be playing a corpse.

Although this is a 2D game and all backgrounds will be painted, my plan is actually to build this character in 3D. She will then be animated and all her animations will be rendered from eight different angles. I will put quite a lot of effort into making sure the 3D and the 2D blend smoothly, and that everything looks coherent.

I shall soon begin designing the rest of the body. I have sketches of her body shape and over all details, but her clothes are proving to be troublesome. They should logically be the clothes she was buried in, and I want to avoid long dresses and a lot of hanging cloth because of animation issues.

Well, that is a later problem. Let’s rejoice in the fact that we at least have a head, which will be apparent in this game, cannot always be taken for granted! Dun dun dun…