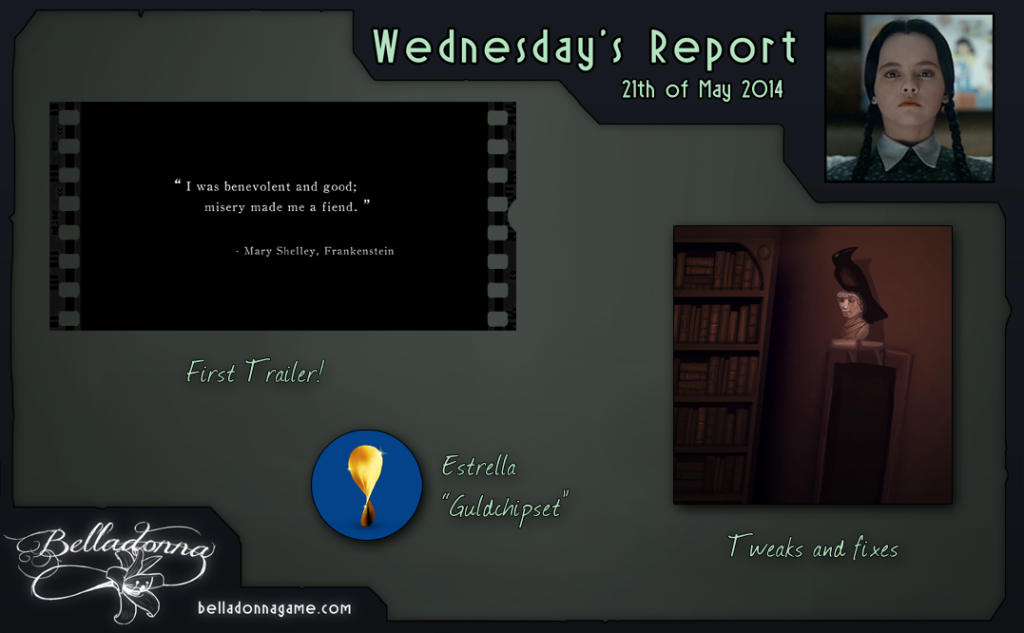 Last week I finally added an animated player character, and that was the last thing I was waiting for before making the first real trailer for Belladonna. It features some gameplay footage with the new characters and over all some mood music and themed quotes.

Wanna watch it? Just scroll down to the previous blog post!

With the trailer completed I also registered to Estrella’s indie game spectacle “Guldchipset” (“the golden chip”, Estrella is a Swedish potato chip manufacturer). There is some prize money at stake, supported by the potato chip eaters of Sweden, so let’s see where that leads.

The entry is in Swedish, but I supposed it can be Google Translated if need be. There’s a “hype” button visitors can click to show their interest and support, but I don’t think the hype value actually means something.

You can check out the entry here:

With an animated character working the project is now back on track again. I have spent some time solving smaller issues that have popped up along the way. I fixed a problem where the inventory was too small, and the items at the “bottom” could not be used. I also finally manage to get rid of the issue where characters would not stop walking if they started talking immediately when a new scene started, which was just weird in every way.

I have a whole list of small things I fixed, but one of the highlights is that I added a stuffed raven atop a bust of Pallas Athena over the door of the study. Belladonna might actually be set a few decades before Poe wrote “The Raven”, but what the heck. I’m not referring to the poem itself anyway.